A JOURNEY THROUGH THE COSMOS (PTO)

My R-390A Cosmos PTO had poor linearity and a loose tuning shaft. The shaft could be moved in and out lengthwise almost 1/8 inch. When I observed the linearity adjustment disk behind its adjustment port, I could also see that occasionally it would stop turning or slip as the shaft was rotated...not something it was supposed to do. Something inside was broke, and bad. So I decided to "go in," and here are some pictures of that Cosmos PTO adventure for your enjoyment and use. Fortunately, I am able to say that in the end I was successful, and the PTO is back together again and tracking wonderfully (although it looked pretty scary there for a while.) I don't recommend doing this unless your Cosmos is seriously damaged like mine was.

Note: This information and these images are offered free to the hobby, not to be used for reproduction for profit.

The Cosmos PTO is one of several (Collins, Motorola, etc.) PTO's made for the R-390A. It has a unique linearity adjustment feature that uses 48 very small adjustment screws on a corrector disk that rotates slowly as the PTO is tuned. These screws ride on a circular ring slide that in turn "modulates" a spring loaded plunger in a small coil that is in series with the main tuning coil. These "modulations" change as the shaft rotates and slightly vary the oscillator frequency depending on the screw settings. It's possible to get very good linearity with this technique. Other PTO manufacturers used different techniques. I won't go into any more theory of operation or maintenance, there are a couple of web pages about Cosmos adjustment (Chuck Rippel's page has several links), such as Cosmos alignment articles already written about the Cosmos PTO by John Harvie and Tom Marcotte. All of these references were helpful to me in this project. Electric Radio Issues 30 and 31 also include PTO articles by Osterwald (I don't have these so I am not sure if they covered just the Collins PTO or the Cosmos.). The R-390A Video Tape series also has some very good information on these PTOs and how to open and service them. Also I don't know the "official" names of various components in the PTO, so I am making them up as I go along (such as the "corrector disk").

When I first opened the PTO, it looked like the lead screw was not thoroughly mating with the fiber bearing plate in the rear. In fact the end of the shaft was dangling in mid air about 1/8 inch away from its bearing plate. If I pushed in on the shaft from the front, it would move backward and mate properly. But then it would eventually work its way out again unless held in place. This did not seem right at all. Why was the shaft able to slide that much? The picture below shows the lead screw properly mated with the bearing plate as it should be. (Note: Having never seen another Cosmos PTO, I can only assume this is the proper configuration. The R-390A video series does seem to show the shaft being inserted into the bearing plate in this manner). 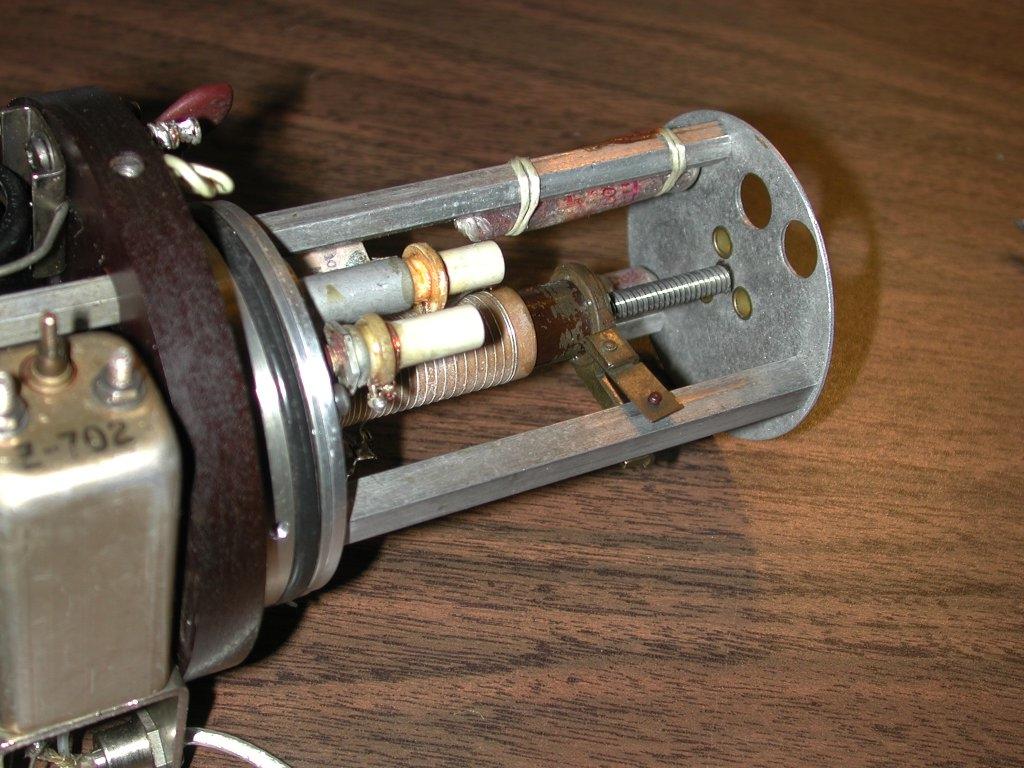 Since the corrector disk was slipping and the shaft was loose, I suspected something amiss in that area. But to get to it, I had to go to the inner sanctum of inner sanctums. But even that turned out to be fairly straightforward. Four screws hold the PTO coil assembly to the front part. In between these two halves is a cavity that houses the corrector disk and associated stuff. I unsoldered the two leads from the PTO that attach to a couple of feed throughs first (see below), removed the 4 mounting screws and gently pulled the two halves apart. Had to get all the solder off the feed through pins so they would pass through the insulating grommets. See figure below. If you look carefully in the opening between the two parts, you can begin to see the small disk and its 48 linearity adjustment screws. 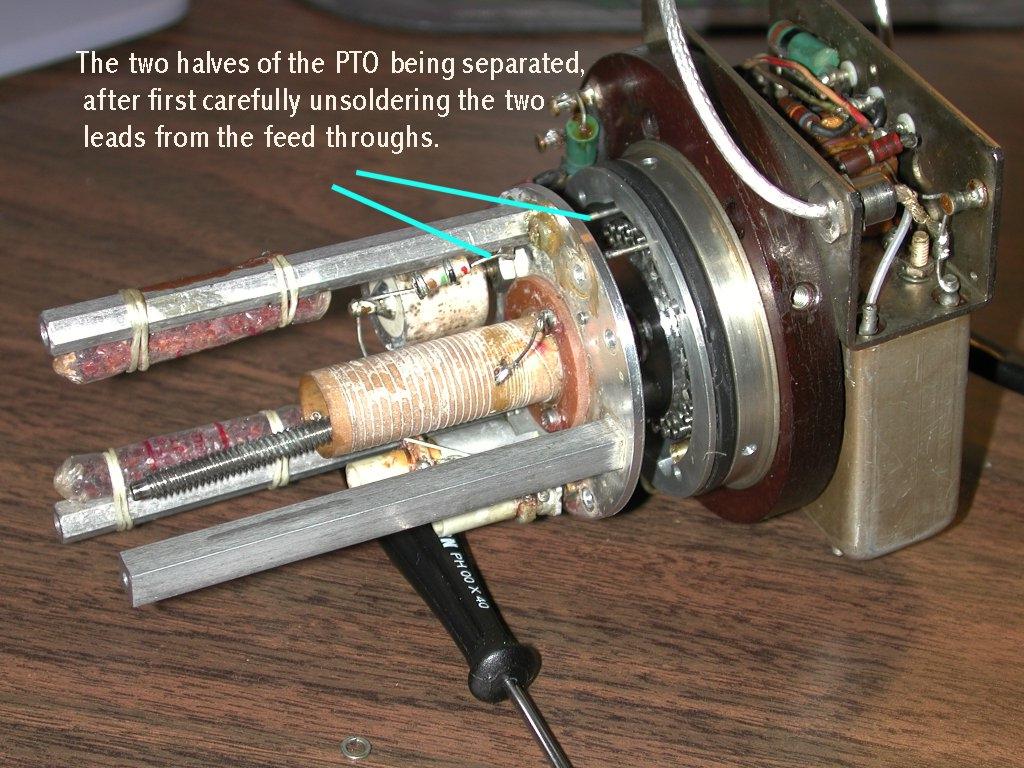 Once the two halves are apart, you can easily see just how the corrector disk with its 48 adjustment screws works in conjunction with a flexible ring (on the opposite half of the PTO) to continuously adjust or modulate the little series coil with its spring loaded core and plunger. Every 25 khz, the tuning is tweaked slightly by these screws to compensate for non-linearities in the main coil. With the PTO assembled and closed up, these screws have to each be adjusted by hand using a frequency reference or counter to establish the linearity. An external access port is provided for this purpose. (Even though there are 48 screws shown on this disk, only 40 of them will actually be effective within the 10 turns from 2455 to 3455 khz.). 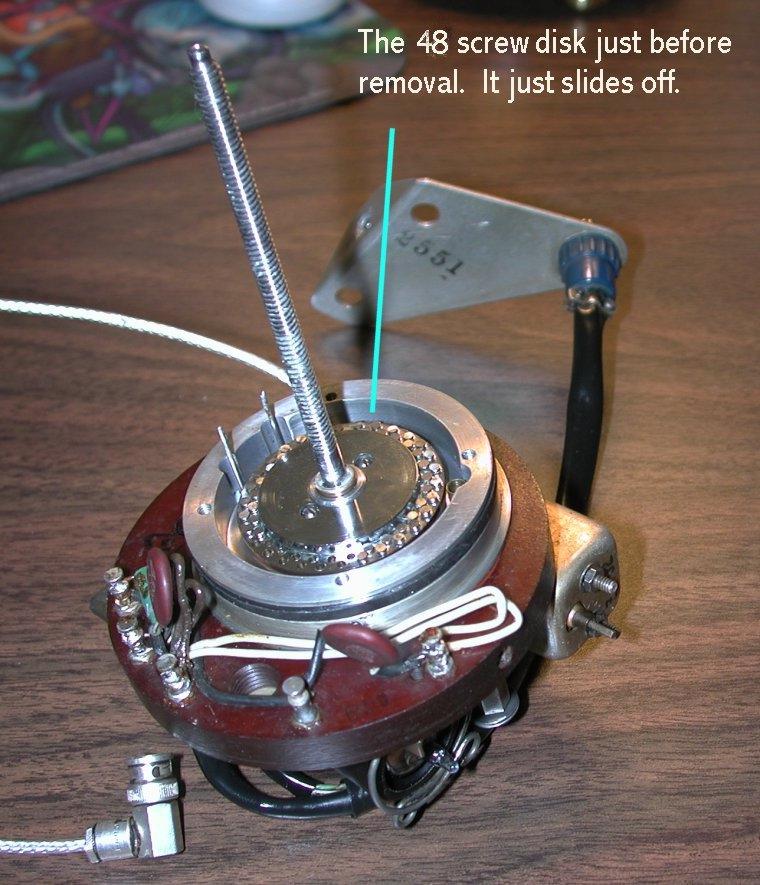 Opposite this disk of screws is the flexible slide ring and spring loaded plunger that continuously adjusts the compensating coil core. Note that the second small coil shown is another compensating coil used to establish end points, i.e. to adjust the tuning so that the PTO goes from 2455 khz to 3455 khz in exactly 10 turns. This end point adjustment is typically made before adjusting the linearity screws, but usually has to be revisited afterwards.

Here are pictures of the disk after removal. I understand that most Cosmos disks use regular flat head screws. Mine, unfortunately, has some really hideous super microscopic set screw heads, like miniature splines or torx heads. Nothing on the planet could be found to fit. So out came the file and magnifying glass and several hours later an old jewelers .04 driver was refashioned into something that would work more or less. While the disk was out, I worked the screws a little to loosen them up (one was stuck and still is to this day). Then I backed them all off fully counterclockwise, then one turn clockwise as a starting point. As it turns out, this put each of my tuning points about 3 khz too high. After reassembly, clockwise rotations of each screw brings the oscillator frequency down 3-5 khz., and an accurate counter is used to adjust each screw every 25 khz (or every 90 degrees of rotation). 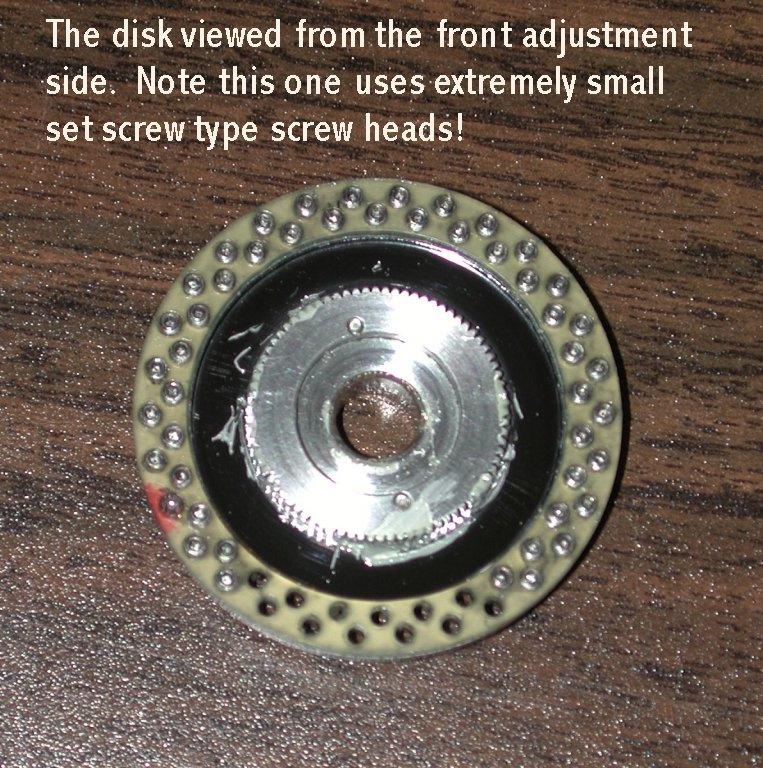 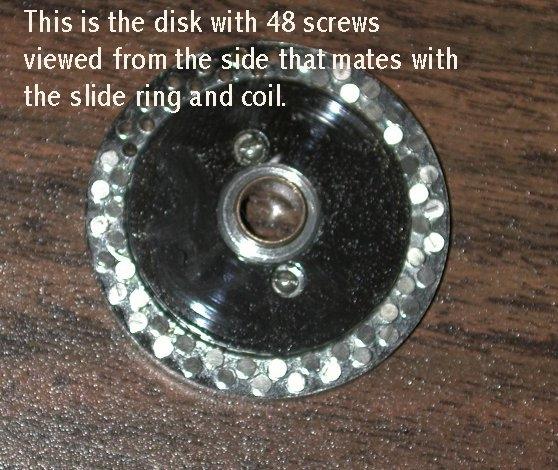 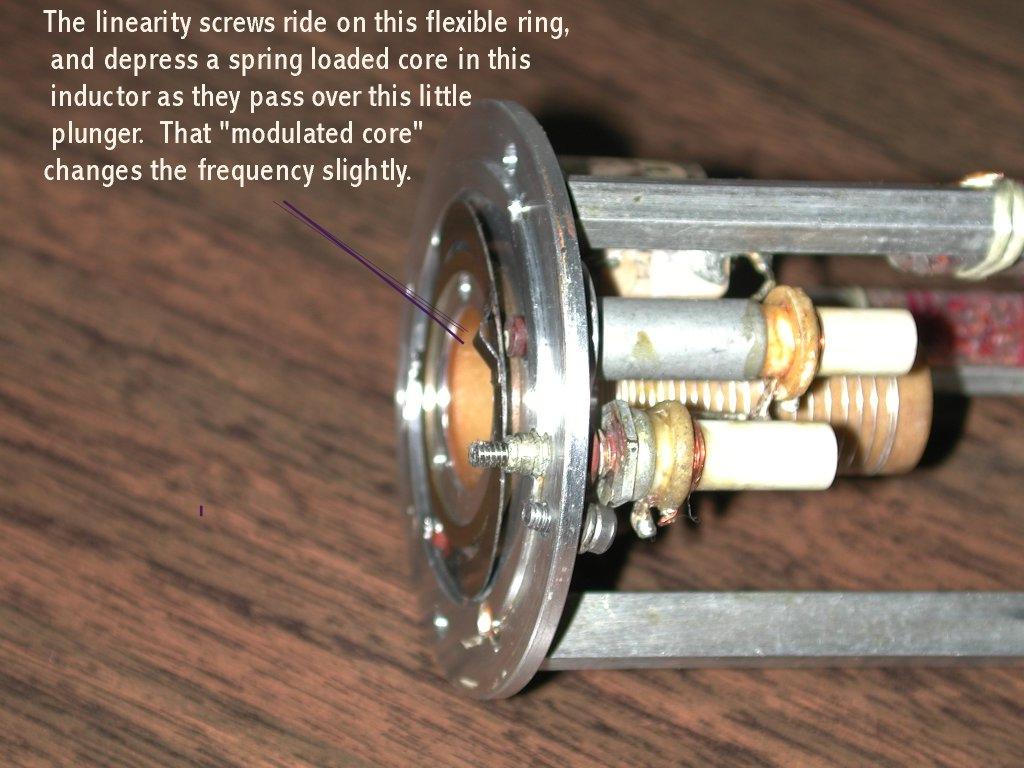 Now for the problem at hand. The disk was slipping. So it had to come out (it just slides off the shaft), revealing the watchwork gearing behind it that makes it rotate at about 1/10th the rotation of the lead screw (it makes about one complete revolution for each 10 turns of the main shaft). Herein was the culprit. 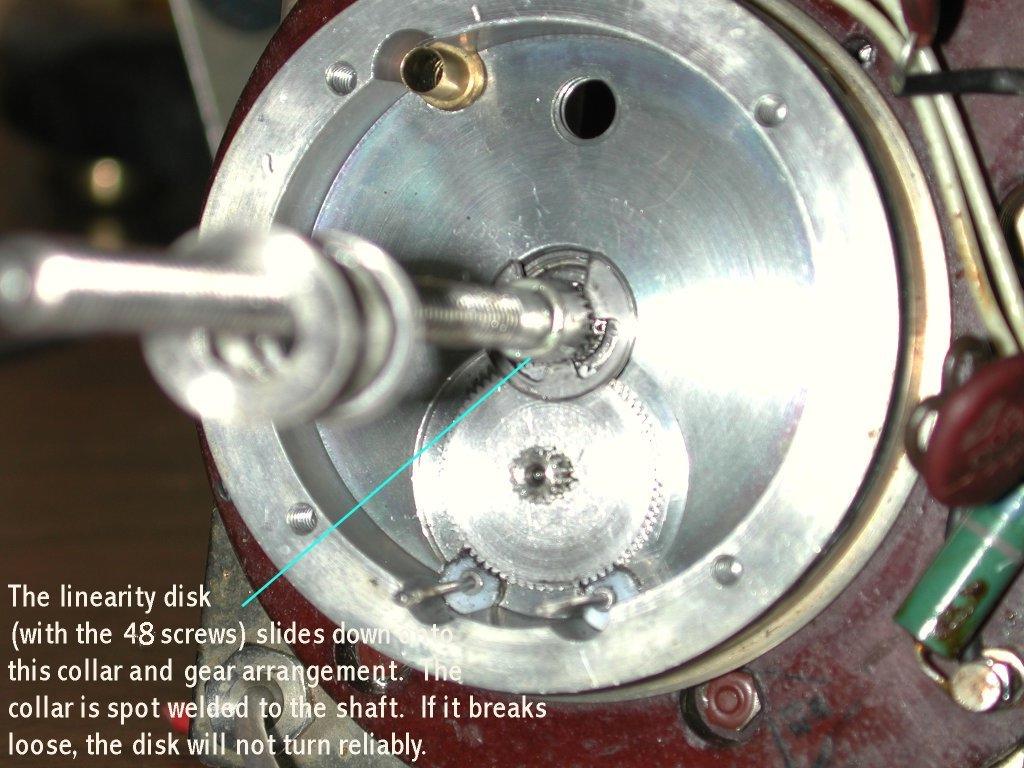 A collar that the disk slides onto, and which also contains a set of gear teeth that drive the larger gear wheel, had broken loose from its moorings on the lead screw. It is apparently supposed to be spot welded to the lead screw as one piece. It not only drives the disk, but also secures the shaft lengthwise so it doesn't slide in and out. The weld had broken, allowing the collar to slip freely. How in the world do you reattach a collar without gumming up the delicate workings around it? I didn't have the high-tech welder or bonder that was originally used. The only solution I could come up with was to create some artificial "knurlings" around the lead screw so that when the collar was slipped over them, it would be held in place by friction. So I did that by removing the collar, and very carefully using some dikes, just enough to rough up the surface of the lead screw exactly where the collar would sit. Then sliding the collar back on, of course the knurlings wouldn't let it slip on easily. Some heat from the soldering iron expanded the collar just enough to allow it to be tapped on over the knurlings. Then after it cooled and contracted around the shaft, bingo, it became securely held in place.

Now everything had to be put back together again and adjusted. I wasn't out of the woods yet. One thing is critical. You will note that some of the screw holes on the disk in my PTO were vacant. The disk has to be reinstalled in the proper orientation so that when the PTO tuning core is screwed back onto the shaft and in its resting position, the disk is "synchronized" mechanically with it. Otherwise, you could end up staring at some empty screw holes as you try to bring in the frequency during the adjustment process. In my case this was a little trial and error, and several re-openings, but I finally did find that if I first set the disk so that the 15th screw from the clockwise end (or was it counter clockwise?) was visible in the access port, then started turning the core back onto the lead screw at that point, then when the core was back where it was supposed to be, all was well. Just hold the core by hand and turn the shaft clockwise and let the core ride back to proper position.

Fortunately it went together reasonably well. But on its first test it wouldn't oscillate! I re-opened it and discovered that I had managed to break the center tap wire off of the main coil (it was one of those two leads to the feed-throughs I was supposed to remove carefully!) Some microscopic soldering and a little epoxy cement fixed that, and we were back in business again.

The picture below shows the reassembled Cosmos PTO and its two adjustment ports in the front. On the right is the end point adjustment coil. This is used to set it so that exactly 10 turns of the shaft moves the oscillator from 2455 to 3455 exactly. Left of that is the port where you access the linearity screws. As you turn the shaft, the disk rotates behind this port and at each 90 degree (or 25 khz) another screw is centered in the window for adjustment. 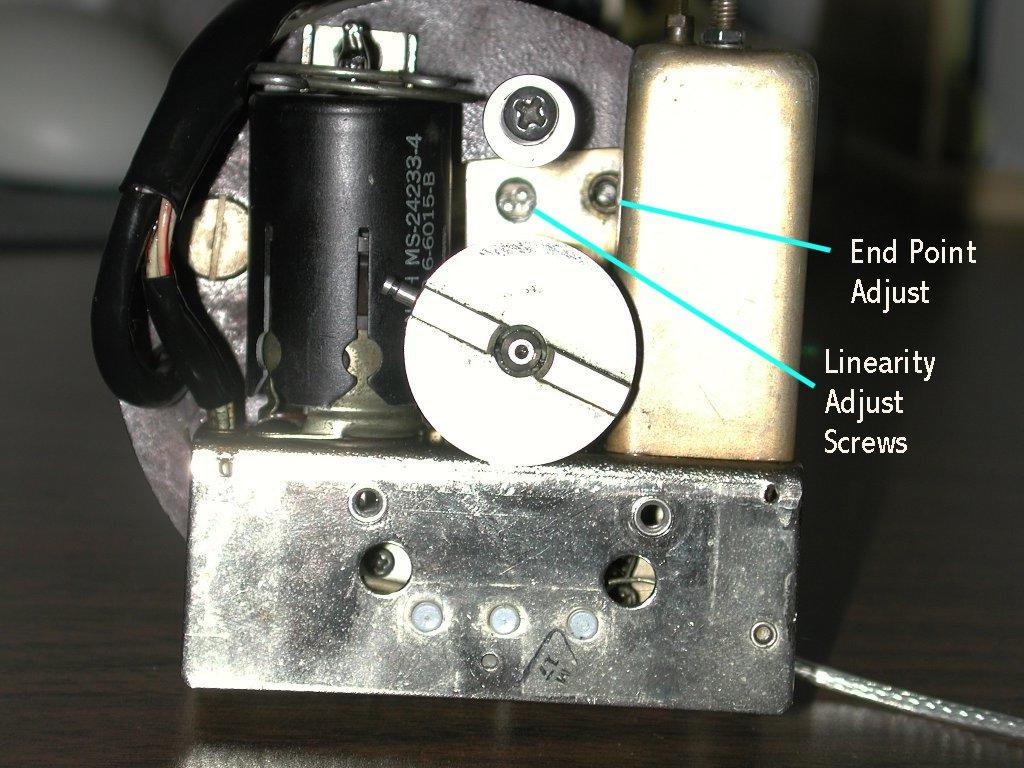 A time consuming process but it worked! As said before there are various pages and articles describing this adjustment procedure, as well as end point adjustment, so I won't repeat it here. Just be prepared to sit for a long time and get neck cramps.

Was it worth it? You bet! In the end I am very happy with my PTO now, and the linearity is excellent. But as I said before, don't do this unless you really need to.